‘I’m very jealous of this dealer’, says Benjamin Walker of FitzGerald Fine Arts, eyeing the stand to his right. ‘He has these gorgeous small pieces – he unloaded some cases, and it looks beautiful’. The adjoining gallery, Porfirius Kunstkammer (founded by Alex Van den Bossche), specialises in cabinets of curiosities, which is convenient because the stands in the TEFAF Showcase section – where both dealers are exhibiting – are hardly bigger than cabinets themselves.

Porfirius’s display of rare, small items, which range from a magnificent natural fan of coral to an intricate, machine-turned wooden box made for the Tudor court, is compact and carefully clustered around the edge of the stand. FitzGerald Fine Arts is exhibiting contemporary Chinese porcelain and ink works, some of which measure over a metre, and has adopted an altogether different approach, partitioning the space to create a narrow snaking corridor. Visitors are obliged to edge past the wall-mounted pieces and standing vessels, whose invitingly smooth surfaces you are permitted to touch. 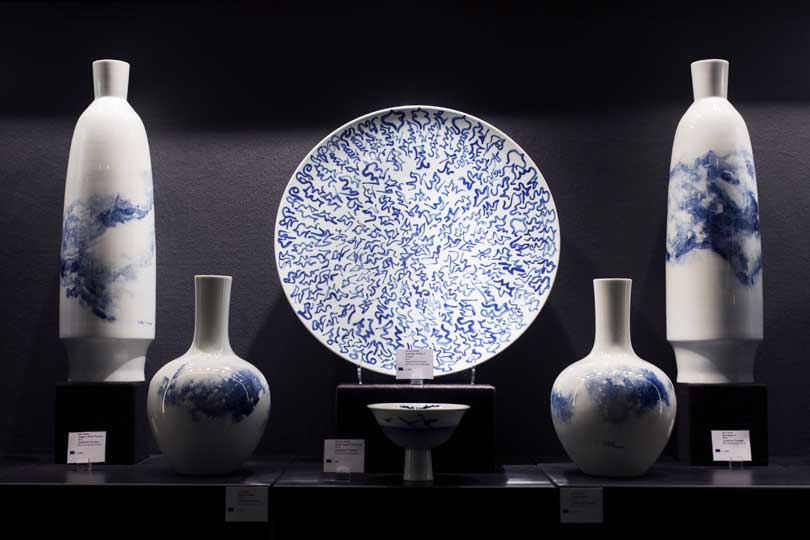 274 of the world’s top galleries and dealers exhibit at TEFAF’s main fair: space is at a premium and the waiting list long. The Showcase was introduced to offer promising new galleries the chance to participate at Maastricht as a way of developing their businesses. Dealers who have operated independently for three to 10 years apply for the six available booths.

Like all aspects of TEFAF, the Showcase is carefully vetted, and the selected galleries are notable not only for their quality, but for their diversity – this year, exhibits ranged from Dutch Old Master paintings to fine art photography. The best among them offer something distinctive that singles them out in a larger showroom full of cumulative clout.

FitzGerald Fine Arts’ contemporary ceramics complement the older Jingdezhen porcelain on show elsewhere, and caught the eye of well known antique collectors making their first contemporary purchases – ‘we knew there was a niche here for this type of art’. Van den Bossche’s service is also unusual. A collector turned dealer, he works closely with clients over long periods to develop their own, eclectic Kunstkammer, rather than focusing on bigger one-off sales. He met several new collectors over the course of the fair; crucial contacts for a dealer whose business depends on developing longstanding relationships.

Exhibiting at the Showcase can be an invaluable leg-up to the top tiers of the art market, particularly because, as Van den Bossche notes, ‘The vetting is top level – the best guarantee the customers can have in the world’. The next step is to get into the main fair. Yannick Durand of Galerie 1492, who exhibited at the Showcase in 2010, found his place among the main galleries three years later. ‘The thing that marks TEFAF out’, he explains, ‘is that people come, they look at the pieces, and they buy.’ Yesterday morning, it was announced that another former Showcase exhibitor, Galerie Didier Claes, had made some of the week’s major sales, including that of a Luba stool to the Musée Dapper in Paris.

Once you’ve shown at TEFAF Showcase you cannot apply to the scheme again, so the success of the exhibition is paramount to the exhibitors, who had clearly been working hard. ‘It’s an Olympic discipline’ to man the stand for the entire course of the event, Van den Bossche joked. But nobody really had any complaints – even a few square feet at a show like TEFAF can make a serious impact to the security and reputation of a new business.

Beyond TEFAF: What’s on around Maastricht (Imelda Barnard)

Dada artist Hannah Höch’s witty, feminist work in collage and photomontage is as inspiring as ever

The sad, shameful demise of the Whitechapel Bell Foundry

The appeal to save Britain’s oldest place of manufacture has been rejected and the foundry will become a boutique hotel. How could Historic England have let this happen?

Will a gladiator’s-eye view make visiting the Colosseum more spectacular?

Five artist collectives – and no individuals – shortlisted for Turner Prize

Plus: the Istanbul Biennial has been postponed to 2022, and more stories

Germany to return Benin Bronzes from 2022

The tender fictions of Lynette Yiadom-Boakye

In her portraits of imaginary people, the artist conjures a world that feels joyfully real