The bunker dominates an entire square block in Berlin-Mitte, an 18-metre tall block of poured concrete. Its façade is studded with bullet holes and rampart-like windows. A heavy steel door is held open with an ancient leather strap. This is the unexpected home of the Boros Collection of contemporary art. One nearly trips over Olafur Eliasson’s Driftwood Family (2010), two logs which seem to have been forgotten in the antechamber.

Built by the Nazis in 1942 to withstand air raids, its axial symmetrical structure is based on the plans of Karl Bonatz. When East Berlin came under the control of The Red Army in 1945, they made it a prison. Later, it served as refrigerated storage for imported Cuban food produce (which earned it the nickname ‘The Banana Bunker’). After the Wall fell, it played host to hardcore, multi-floor techno dance parties, and fetish nights, until it was closed in 1996. All of the bunker’s former uses – military stronghold, prison, storage facility, nightclub – remain visible in traces. Neon graffiti, sanded off the concrete walls, registers as cave painting, worn by time and weather in some ancient ruin.

Karen and Christian Boros purchased the bunker in 2003 to house a 3,000 square-metre exhibition space and their own private residence – an open-plan penthouse sealed with a load bearing steel-glass facade, plus roof garden terraces and, naturally, a pool. The architect, Jens Casper of Realarchitektur, cored out the building’s interior, cutting away floors and walls and excavating hundreds of cubic metres of concrete that comprised the 3 metre thick roof, while leaving the 1.8 metre thick outer wall in tact.

He created dynamic, intersecting vertical spaces and roomy galleries, which opened to the public in 2008. Over the following year, the project won multiple international awards. Visitors to the galleries reencounter works from different vantage points, looking down from ‘windows’ and ‘balconies’ carved out of the original structure. Work by Wolfgang Tillmans – Boros began collecting his photographs in the early 1990s, before his rise to fame – occupies galleries on several floors, which are connected, vertiginously. The collection draws attention, and responds, to the context in which it is shown. The artist duo Awst & Walther discovered a hole bored out by geologists in order to take a sample of the building material that leads directly to the outside. For Line of Fire (2012) they created a golden arrow that appears to have been shot through the hole, into the gallery wall opposite. Original bunker cells house small works, such as Alicja Kwade’s water-cut steel replica of shattered glass, or Marieta Chirulescu’s subtle paintings, which create gradients of colour by rolling a paint roller back and forth vertically on flat grounds.

After navigating a long, low original corridor (just 2 metres high), suddenly one arrives at a three-storey vertical space and encounters Ai Wei Wei’s Tree (2009–10) composed of dead wood, and Michael Stailstorfer’s Forst (Forest; 2012), a real tree, hanging from a rotating motor, drawing a circle in dirt and dust on the concrete floor beneath it. Elsewhere, Stailstorfer’s Zeit ist keine Autobahn – Frankfurt (This is not a highway – Frankfurt; 2008), a tyre attached to half of a car axle, spins against the painted white wall of the gallery at the speed of a car driving. Over time, it creates a pile of black dust on the floor, and the aroma of burning rubber. 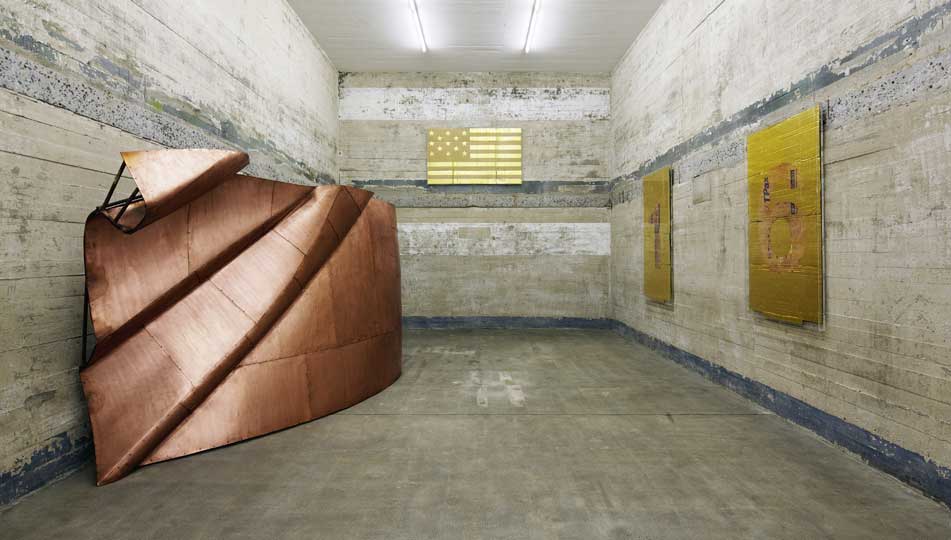 International politics and global economics are not taboo subjects for these collectors. Danh Vo, who sought to address the global networks of wealth distribution, and thus immigration, divided up a copper recreation of the Statue of Liberty, We The People (2012), sold and dispersed it. The pieces naturally followed the flow of money, markets, and with this, migrants. It comes as no surprise that one of the pieces found its way here.

While the collection houses internationally acclaimed artists such as Thomas Ruff and Rirkrit Tiravanija, there is a strong component of Berlin-based artists, such as Georgian sculptor Thea Djordjadze, represented by Sprüth Magers (the gallery Karen worked at when she met Christian Boros).

Emptiness here becomes almost sacred. Spartan galleries house only a few discrete objects – Berlin/New York-based Klara Lidén’s exquisite multilayered poster sculpture stands alone in a white room, Thomas Scheibitz’ luminous paintings and ceramic sculpture are installed in characteristically idiosyncratic style in a massive, two-storey empty gallery. The capital and labour required to carve out a three-dimensional space such as this is vast, so space is an even more valuable commodity here than usual. Within this bunker, the sparseness of the installations is shocking.

The Boros Collection, Reinhardtstraße 20, Berlin-Mitte, is open by appointment only. Tours to the gallery can be arranged ahead of time.

Review: ‘Symphony of a Missing Room’ at the Royal Academy

The Prix Pictet is a prize for art with an argument, and this year’s shortlist is as strong as ever

The Apollo 40 Under 40 Art & Tech podcast: the art of gaming