‘The main thing that has changed about Liverpool is the weather,’ Venezuelan artist Carlos Cruz-Diez tells me through a translator. When the 91 year-old last exhibited here in 1980, his principle memory is of the umbrella he was obliged to carry at all times. Today, though, the sunlight is making the city’s cleaned-up Albert Dock look like an image from a lifestyle brochure.

Cruz-Diez has returned to the city for the unveiling of ‘Dazzle Ship’, a work commissioned by Tate Liverpool and 14-18 NOW Centenary Art Commissions. As part of both the First World War commemorations and this year’s Liverpool Biennial, he has been given carte blanche to experiment with camouflage-inspired patterns on a decommissioned pilot ship called the Edmund Gardner. The result is a vessel painted in stripes of red, green, yellow and black – ‘very English’ colours, apparently.

The original ‘dazzle’ pattern was a strikingly modern take on camouflage that was intended to distort the enemy’s perception of a vessel’s speed and distance. According to research conducted at the University of Essex, the pattern had the unintentional but doubtless welcome effect of sparking severe migraines in anyone forced to stare at it. It was, both figuratively and literally, an extremely aggressive new type of art.

The man behind the pattern was Norman Wilkinson, an artist turned camoufleur whose wartime colleagues included Edward Wadsworth. Their ‘dazzle ships’ became an icon of British naval power and ingenuity, and were astonishing in their aesthetic éclat, owing as much to the paintings of the Vorticist movement as they did to traditional naval camouflage. Some were painted in ‘rib’ patterns so as to resemble gigantic, water-borne zebras; others were more skewed and jagged, like outsized reproductions of David Bomberg’s abstract paintings.

This was modern art applied to warfare, and in Wadsworth’s 1919 painting Dazzle Ships in Drydock at Liverpool, it was transferred back to modern art. While the other Vorticists’ early enthusiasm for the principles of the machine age had sunk into the mud of the trenches, Wadsworth’s painting conveys palpable excitement. This, in turn, is as exciting as the interdisciplinary exchange of ideas that informs it.

I wish I could write the same of Cruz-Diez’s Dazzle Ship. The project is an interesting idea, and the reaction from visitors was enthusiastic when I visited. But the result is a bit flat – colourful it may be, but there’s not that much to it. Perhaps unrealistically, I’d been expecting something that drew on the confrontational vigour of the wartime patterns. Later this month in London, German artist Tobias Rehberger will unveil another ship re-painted in a dazzle-inspired colour scheme. He has used the patterns extensively in his work before – it will be interesting to see how he handles his commission.

Much truer to the invention of the wartime camoufleurs is an exhibition just across the dock at Tate Liverpool, where a retrospective of Indian artist Nasreen Mohamedi’s work has opened. The Cruz-Diez’s ship and the Tate’s concurrent Mondrian exhibition may be the big draws to Liverpool’s 8th Biennial, but Mohamedi’s work is by far the pick of the bunch.

Mohamedi’s geometric drawings owe much to the styles of International Modernism, Contructivism and the Bauhaus. The exhibits at Tate Liverpool date from the 1960s through to the artist’s death in 1990. That Mohamedi chose to revisit the signifiers of that optimistic era is significant – Indian art was dominated by the figurative, and the utopian vision of post-Cubist art and design was very much a thing of the past.

The early work has a spidery delicacy, which gradually morphs into patterns that are more rigid but no less intricate. Some grid drawings from the early ‘70s resemble preliminary sketches by the British Minimalist James Hugonin, other muted shapes resemble sepia photos of Art Deco buildings. 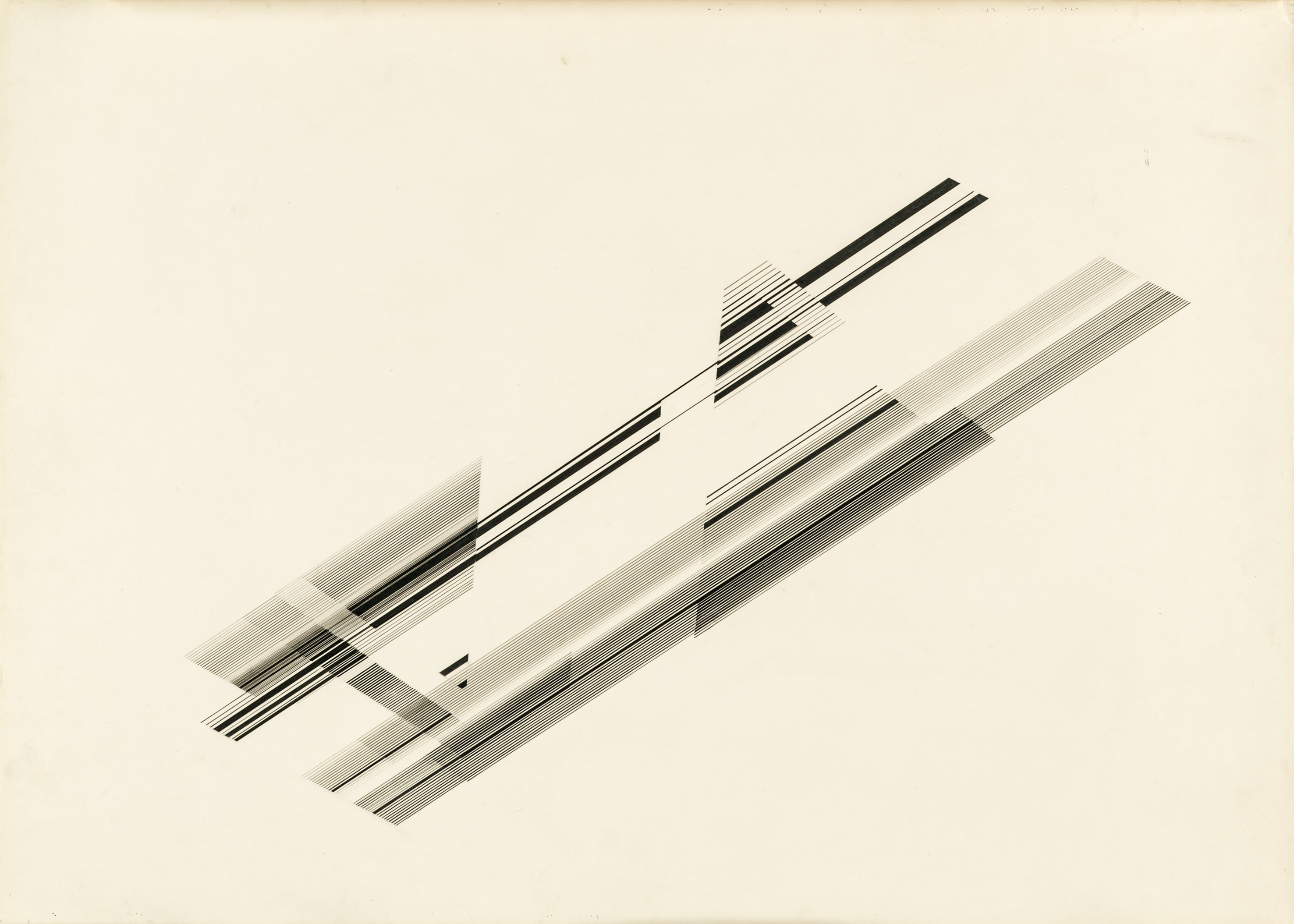 I sense I may not be alone in detecting a nostalgic quality in her drawings. The paper is used is mostly a distinctive buff-grey colour, lending them an immediate sense of age. But it’s a long way beyond pastiche – in fact, the elegiac mystery of the work is only enhanced by the knowledge that it’s so defiantly out-of-step. There’s something wonderfully bloody-minded about the work’s refusal to give out clues; nothing here has a title, let alone any comment from the artist; other, that is, than a transparent fascination for the possibilities afforded by pencil and paper.

‘Nasreen Mohamedi’ is at Tate Liverpool until 5 October 2014.

14-18 NOW is a major cultural programme taking place across the United Kingdom to mark the centenary of the First World War.

The National Gallery has colour-coded its collection for its latest exhibition, resulting in some interesting pairings