During the years it takes to organise an exhibition, twists and turns occur, and these can result in delays or even a cancellation, creating a gap in a museum’s exhibition schedule. That was the situation we faced at the Frick Collection in spring 2013, and we opted to pull together a ‘replacement’ exhibition: a presentation of the museum’s two Flemish tapestries – which are usually kept in storage due to lack of space – with subjects drawn from Don Quixote. With these two beautiful pieces as the starting point, ‘Coypel’s Don Quixote Tapestries: Illustrating a Spanish Novel in Eighteenth-Century France’ (until 17 May) was created in just 22 months – exactly the age of my daughter.

I read Don Quixote in French, my native language, as probably did Charles Coypel (1694–1752), first painter to Louis XV, who became the most influential 18th-century illustrator of Cervantes’ novel. Coypel’s scenes inspired Philippe de Hondt (1683–1741), who created the full-scale preparatory designs (called cartoons from the Italian cartone, or paper) for the Frick’s Flemish tapestries, made in Brussels, around 1730–45, in the workshop of Peter van den Hecke (1680–1752). Coypel’s Don Quixote paintings were also originally cartoons in their own right, made as models for the weavers at the celebrated Gobelins Royal Manufactory, founded in 1662 by Louis XIV to create sumptuous tapestries, silver and pieces of furniture to adorn the French king’s residences and spread his glory through lavish diplomatic gifts. Between 1714 and 1734, Coypel painted 27 scenes, followed by an additional one in 1751, just before his death. The Story of Don Quixote would become one of the Gobelins’ most celebrated tapestry series, woven nine times during the period 1717–94, with a total of about 200 panels created during the 18th century.

A keen entrepreneur, Coypel entrusted the engraving of his Don Quixote paintings to some of the most distinguished French 18th-century printmakers. Thousands of sheets were printed and sold individually or in folios. The prints, reduced in size, also illustrated Cervantes’ novel in French, English and Dutch editions. Coypel not only earned a substantial additional income from the sale of these prints, but also gained wide exposure and fame. Philippe de Hondt was inspired by them when he designed the tapestry cartoons for Peter van den Hecke. By presenting Coypel’s 28 scenes in tapestries, cartoons and engravings, this exhibition is not only about the process of making a tapestry in 18th-century France and Flanders but also about the adaptation, translation and interpretation of one of the most influential novels ever written. From the time it was published – in two parts in 1605 and 1615, respectively – the book enjoyed immense popularity, with countless reprints, translations and transpositions spread throughout Europe.

At the age of 18, Coypel himself wrote a play titled Don Quichotte. It was not successful, but several years later he gained some respect as a playwright with Les folies de Cardénio, a comic ballet in three acts danced by Louis XV at the château des Tuileries in December 1720. Coypel had evidently read Cervantes’ novel, but the selection and composition of his 28 painted scenes is likely to have been inspired by contemporary French theatre and ballet. What is the significance of his use of transposition between genres (from novel to play and ballet) and translation (from Spanish to French) in creating these scenes? How much has been ‘lost in translation’ from the original text? It seems to me – having studied these illustrations while reading the novel – that Coypel’s paintings are representative of a certain place (France) and time (the 18th century), while the novel itself is timeless. In Coypel’s scenes, Cervantes’ characters wear French 18th-century clothes, are shown in French 18th-century interiors, and are on the whole depicted in a charming style that emulates the artist’s contemporaries Jean-Antoine Watteau and François Boucher. The episodes that he selected – which focus on pastoral subjects like the inconstancy and folly of love, as well as the inevitable marriage of convenience – were both immensely entertaining and easily recognisable to a French 18th-century audience from numerous plays and ballets performed at court and in fairs. 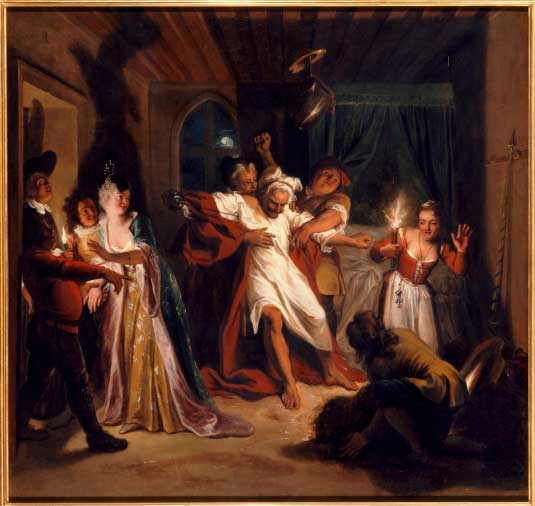 Coypel’s Don Quixote scenes (and ultimately his commission by the Royal Gobelins Manufactory) were the result of the novel’s immense popularity and many interpretations in France during the 17th and 18th centuries. With his paintings transposed into tapestries and engravings, and those engravings transposed again into Flemish tapestries, Coypel perpetuated this process of adaptation and dissemination, and further contributed to the popularity of the novel. The exhibition continues this tradition by presenting Coypel’s 28 scenes in various mediums, and with a catalogue that includes corresponding excerpts from the novel (drawn from Edith Grossman’s 2003 translation) – encouraging everyone to discover, or rediscover Cervantes’ text and to consider the extent to which the 18th-century French painter captured the spirit of the 17th-century Spanish novel.

Of course, my interpretation of the novel is no doubt quite different from Coypel’s. The modern interpretation – following the 19th century Romantic view – exalts Don Quixote’s idealism and the sacrifice of his life for a higher moral principle. Towards the end of the novel, I began to abhor those characters who mock Don Quixote and his squire Sancho Panza – in fact, the very people so beautifully represented by Coypel. Today, the incredible psychological transformation of the two amazing protagonists leaves nobody indifferent. But none of this is perceptible in Coypel’s illustrations – even if, in an allegorical scene, he depicts the powerful last chapter of the novel, in which Cervantes’ hero ends his journey made sane by wisdom.

Blinded by the Sun: The Age of Louis XIV (Wolf Burchard)

A Woven Palette: ‘Spectacular Rubens’ at the Getty (Louise Nicholson)

The Prado, the Getty and the Metropolitan Museum celebrate the art of tapestry (Louise Nicholson)

There’s more to Moore than his monumental sculptures