The best place to get a drink in Los Angeles this summer isn’t a fancy craft cocktail bar or an upscale fusion restaurant, but a tiny carport in a midcentury apartment parking garage.

Los Bar, a project by Andreas Bauer, Christoph Meier, Robert Schwarz, and Lukas Stopczynski, is an almost-to-scale replica of Adolf Loos’s iconic American Bar in Vienna. It occupies one segment of a six-car garage in the Mackey apartments, designed by fellow Austrian modernist architect Rudolph Schindler. The original Loos bar is a paragon of refined simplicity: Loos’s attention to material finish and simple, boxy geometry created an intimate space replete with red marble, onyx, mahogany, and wraparound mirrors. The bar still earns its name with a steady jazz soundtrack, white-coated bartenders, and a menu of stateside classics like Highballs, Whiskey Sauers, and Manhattans. Los Bar doesn’t offer quite as many options – no cocktail muddlers or lemon twists here – but the artists do take turns serving gin, whiskey, tequila, vodka, and beer. For sturdier guests they’ll mix a kitchen sink combination of them all, delivered in a glass glued to a heavy concrete plinth.

Both a play on the German pronunciation of ‘Loos’ and the Spanish article in ‘Los Angeles’, Los Bar translates the understated elegance of Loos’s bar in cheap and readily available materials. MDF walls and a cardboard coffered ceiling mimic marble. Thin sheets of Mylar stand in for mirrors. Lampshades are cut from pieces of opaque packing foam. The artists reproduced the strip of onyx clerestory windows in Loos’s bar by sprinkling wood glue and sawdust between two strips of clear plastic. Small booths lined with electric blue air-conditioning filters wrap around diamond-shaped tables bearing ashtrays made from melted Pabst Blue Ribbon cans. (Smoking is prohibited in LA bars, but as an ‘art piece’ Los Bar makes its own rules. Patrons are encouraged to light up, as they are in the hazy Vienna joint.)

Los Bar oozes folksy charm, a composite of its DIY construction and its background playlist of village pub tunes thoughtfully curated by Schwarz – ranging from German polka standards to crooning Mexican canciones de amor. If American Bar feels intimate, Los Bar is positively cramped – it’s a 0.65:1 scale reproduction. The central floor space has been pinched, pushing patrons into tiny booths or up against the bar, its bumper railing fashioned not from brass but an orange foam pool noodle.

LA’s lazy sprawl might seem a far cry from Vienna’s cold baroque grandeur, but the two cities share a historic bond often overlooked in the annals of architecture. Viennese architect Rudolph Schindler lived and worked in Los Angeles for more than three decades, for some of that time with his fellow Weiner Richard Neutra. While in Austria, both architects had studied under Adolf Loos, and imported their older teacher’s spare style to Southern California. ‘California Modernism’, LA’s richest architectural legacy, was in fact an Austrian émigré.

Today the Schindler House in West Hollywood serves as the US headquarters for the MAK Center for Art and Architecture, an offshoot of the Austrian Museum of Applied Arts. It preserves Schindler’s physical archive and organises programmes that try to resurrect the spirit of expatriate modernism. In Schindler’s Mackey apartments, the Center runs a six-month residency programme for artists and architects. Like many residency programmes, collaboration isn’t always assured; personalities and creative processes can sometimes clash. But 2015 artists-in-residence Bauer, Meier, Schwarz, and Stopczynski were an instant match. ‘We have the same sense of humour,’ Stopczynski told me. Traces of that humour are everywhere in the bar – from a paper clock whose face bears the mug of Ferdinand Maximilian, the Habsburg emperor killed by a Mexican firing squad, to a Plexiglas humidor, complete with cork and baby powder cigars. 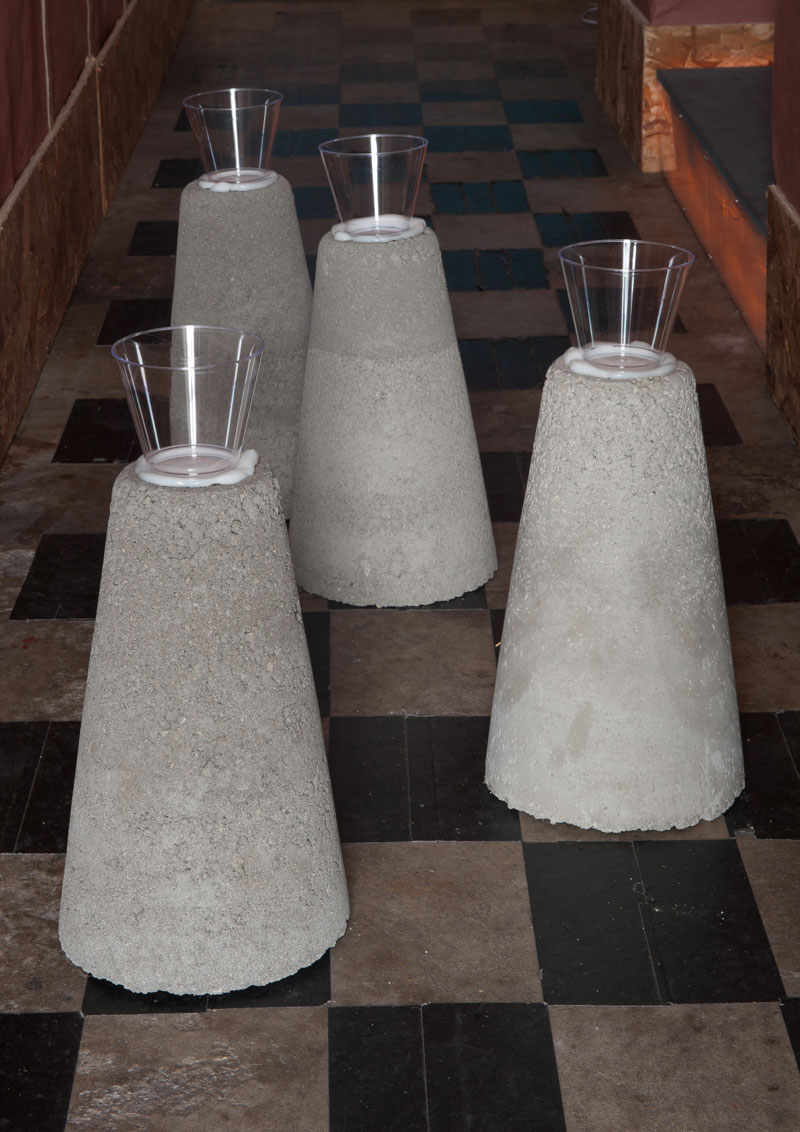 The four artists arrived in Los Angeles for the programme with their own individual project plans. One day, while sitting on the apartment building rooftop, they looked down at the open carport and mused that the deep, narrow space resembled the famous Werkstätte bar. Their measurements confirmed surprisingly close proportions. And so they abandoned their plans, joining forces to play host to their host city.

The artists refer to Los Bar as a ‘social sculpture’ – a physical work of art that facilitates social interaction. In this sense Los Bar also resembles Dieter Roth’s Bar 2 (1983–1997) and Rirkrit Tiravanija’s pad thai (1990), where the detritus of human consumption (and debauchery) aesthetically completes the work. The artists are dedicated barkeeps and keep the space fairly clean, but errant whiskey-stained cups or cigarette burns remind visitors that Los Bar was built to be used. Unlike Roth’s or Tiravanija’s works, which were meant to live in galleries and museum spaces, Los Bar is fully self-contained – a timeless capsule that precludes the world outside its shuttered screen doors. Installed in the garage, impervious to mobile phone reception, it offers the irresistible promise of escape, so rare in the 21st century.

Bauer, Meier, Schwarz, and Stopczynski trade heady conceptualism for heady liquor, and highbrow humour for barroom jokes. But that’s OK. Part of Los Bar’s appeal is that it doesn’t take itself too seriously, and encourages its patrons to do the same. I’ve never felt more comfortable talking to strangers in a Los Angeles bar than I did squeezed inside that hot plywood box, taking in the communal draught of sweat and sour mash.

‘Los Bar’ is open at the Mackey Apartments / MAK Center for Art and Architecture, Los Angeles.

Why rent a gallery when you can use your own apartment?

The director of the J. Paul Getty Museum reports from Los Angeles