There must be tens of thousands of objects in the Barbican Centre at the moment. The art gallery is staging an extraordinary show – the aptly named ‘Magnificent Obsessions’ – that looks at artists as collectors. It asks why artists choose to collect, how they live and work with their objects, and what relationship these have to the art that they produce.

Across two floors, the exhibition creates a series of rooms that evoke each of 14 artist’s collections and how they choose (or chose) to live with and display them. A single piece by each is set alongside, or in some cases against, these massed objects. There are some well-known heavyweights here, from Damien Hirst, Sol LeWitt and Howard Hodgkin, to Andy Warhol and Edmund de Waal. De Waal’s collection of netsuke is, indeed, well known in its own right thanks to his highly successful book on their history The Hare with the Amber Eyes. Some of the collections have relatively obvious links to their owner’s artistic practice: Hirst collects vintage taxidermy and natural history specimens; Warhol collected domestic packaging. Others are more surprising: Howard Hodgkin, it turns out, has an exceptional collection of Indian paintings. 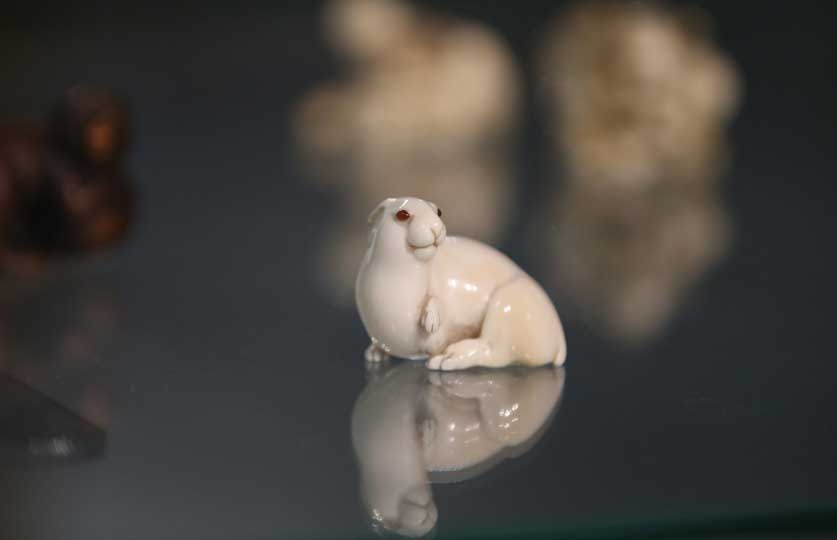 Other artists included here are less well known, at least to me, but their collections throw particularly interesting light on their works. Hiroshi Sugimoto’s collection of 18th-century books, prints and tools comes out of an interest in the differences between European and Japanese anatomical knowledge in that period. His atmospheric photographs of waxwork figures have particular resonance in this context. Others resonate through colour, style and curatorial flare. Pae White’s colourful cloud structures that hang over the double-height space of the exhibition work particularly well with her collection of printed Vera Neumann textiles, themselves hung in rows across the full width of a room, like an intense market stall.

Nice, subtle links are made between the different rooms of collections and their artists as you move around. Hanne Darboven knew Sol LeWitt, and they are displayed in adjoining spaces. Their photographic works that document their lives and homes speak to each other along the connecting wall. Peter Blake’s collection of elephant figures was begun specifically in response to Hodgkin’s Indian paintings. Arman’s profusion of West African art was collected partly in response to the scarcity he experienced as a child during the Second World War; so too was Andy Warhol’s obsessive collecting of the American consumerist ephemera that was absent from his deprived Pittsburgh childhood. There seems a particular appeal in kitsch to the artists assembled here. Martin Parr is drawn to the crudest, most colourful examples of tourist postcards and souvenirs; Dr Lakra collects especially brash and eclectic record sleeves and scrapbooks from flea markets; Jim Shaw purposefully seeks out the weirdest paintings he can find in thrift stores and garage sales; Martin Wong and his mother amassed thousands of objects from New York shops ranging from Chinese teaware to Disney characters.

‘Magnificent Obsessions’ is deliberately arranged such that each visitor can explore in their own order, joining artists and collections as they wish. But, the room that brings together Martin Wong and Danh Vō seems the perfect conclusion. After Wong’s death, his enormous collection sat at his mother’s house, unwanted by a museum, until artist Vō turned it into an artwork of his own in 2013. I M U U R 2 transforms Vō’s selection of Wong’s objects into a collaborative work between the two artists. Its display was interpreted as post-modernist scepticism about categories of artistic value and authorship.

There is, then, a beauty in profusion here. The vast majority of these artists’ objects are not particularly attractive when viewed individually, but gain a beauty when massed in groups. As the introduction text to Peter Blake’s collection explains, ‘there is a vibrancy, colour & joy to the multitude’. I am left wondering if an artist finds safety in this abundance of objects, removed from the tyranny of producing the single, coherent artwork.

‘Magnificent Obsessions: The Artist as Collector’ is at the Barbican Centre, London, until 25 May.