For many centuries in Britain, portraiture was one of the most popular, and lucrative, art-forms. In fact, due to demand, many artists were driven to practicing portraiture whether they liked it or not: ‘If the People with their damn’d Faces could but let me alone a little’ complained Thomas Gainsborough, one of Britain’s most successful 18th-century portraitists, and arguably one of our most frustrated landscape artists. Other artists such as Van Dyck and Joshua Reynolds had ambitions for the genre, painting portraits in what Reynolds called the ‘Grand Style’.

In tandem, printmaking rose through the ranks as the most affordable, accessible and, indeed, ‘Democratic’ form of art. Through prints, reproductions of artworks – including portraits – could be widely circulated. William Hogarth was one of the key players on the scene: he pushed through The Engraving Copyright Act of 1734, protecting original print artwork from unauthorised replication, thus raising printmakers to the level of artists over mere craftsmen.

This brings us to the new exhibition at Sir John Soane’s Museum: ‘Face to Face: British Portrait Prints from the Clifford Chance art collection’, an exploration into the development of portraiture by British printmakers in more recent decades. The eclectic historic home of an 18th-century architect might seem an odd choice of venue for a law firm’s display of 40 modern prints (its full collection numbers over 1,200). But Sir John Soane was a collector of contemporary prints of his day, including works by Hogarth, whose presentation volume of 74 first-impression prints (from the museum collection) and Character and Caricaturas (1743, acquired by Clifford Chance this year), feature in this display. Soane also collected portraits, including those of Napoleon, William Pitt the Younger, Sir William Chambers, and the splendid painting of Soane himself by Sir Thomas Lawrence (1828). So, in effect, this exhibition demonstrates how Clifford Chance has continued where Soane left off. 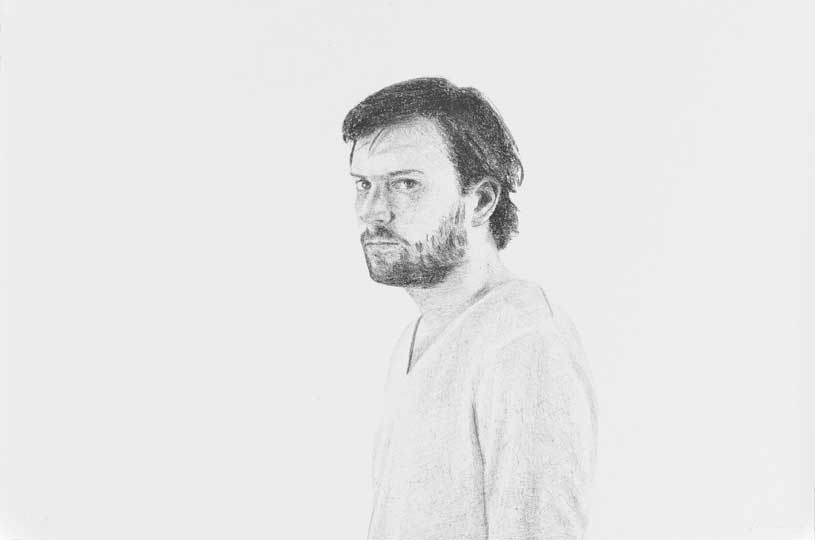 The curator, Jerzy Kierkuc-Bielinski, has done an admirable job of grouping some very varied prints according to common themes, whilst visually balancing the two rooms at his disposal. The thematic groupings (there are perhaps too many) are: process; the subject; realism; caricature and the imaginary portrait; social commentary/the street scene; abstraction; and literary portraits.

Rather than attempt a chronological sweep through recent decades, the viewer is invited to contemplate time-spanning approaches to the portrait. In ‘Realism’, David Hockney’s Henry at Table (1976) is linked with Alessandro Raho’s Simon (2007), and in ‘Process’ an early screenprint by Patrick Caulfield (Portrait of a Frenchman, 1971) is juxtaposed with a recent work by Tim Noble and Sue Webster (Double Double Vision Vision, 2013). The latter displays a particularly novel approach to portraiture and printmaking – the artists drew lithographic ‘memory’ portraits of each other while blindfolded. Soane collected no doubt for his own enjoyment, but also for the sake of instructing his students, and he ultimately gifted his house and collection to the nation for future generations. There is a philanthropic aspect, too, to the collections of companies such as Clifford Chance, who have wisened to the fact that their money and influence might support an up-and-coming generation of artists. Young printmakers represented here include Nicola Thomas, who recently completed her MA, and Turner Prize 2013 nominee Lynette Yiadom Boakye, whose first etching, Siskin (2012) is a recent acquisition.

Clifford Chance has taken measures to raise the visibility of its collection, hosting an annual exhibition and print prize, private tours and some community outreach. And yet, the collection is still normally on limited display in their offices at Canary Wharf, and does not yet have a published catalogue. This exhibition is a key step toward broadening public exposure, and represents an exemplary foray into inter-institutional partnerships. After all, exceptional corporate collections like this should not be seen solely by boardroom businessmen, chewing the end of their pens. Juxtaposing these two collections offers new insights into both, as visitors encounter both a portrait of a man and a portrait of a corporation, displayed – appropriately – face to face.

Let’s hope they do more: I would like to put in a request for a display of either the abstract or landscape print collections next. I hear Clifford Chance has a set of fabulous etched landscapes of north Wales by Chris Ofili…

‘Face to Face: British Portrait Prints from the Clifford Chance art collection’ is at Sir John Soane’s Museum until 24 January 2015.

First Look: The City Lost and Found at the Art Institute of Chicago

How did artists develop new ways of depicting urban life in the 1960s and ’70s?