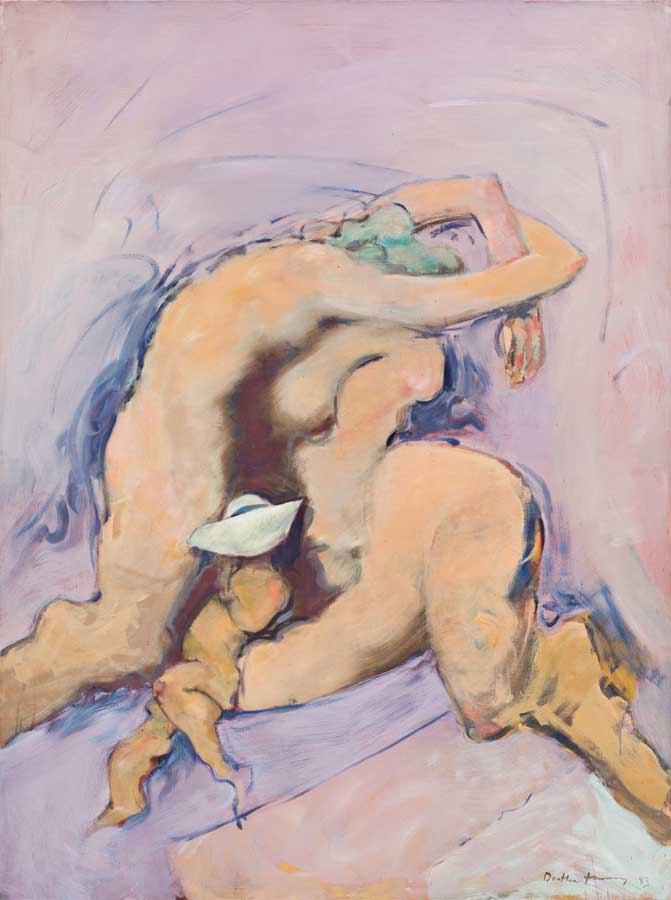 Dorothea Tanning famously said that the term ‘woman artist’ was ‘disgusting’. Perhaps she would have been frustrated by recent coverage of art world gender imbalance – which often discusses the issue in those terms – as Web of Dreams, a selection of her paintings and works on paper, opened at Alison Jacques Gallery.

Despite Tanning’s revulsion of female categorisation, it is difficult to approach this show without placing significance on the artist’s gender: her work focuses heavily on the female form.

In Tableau vivant (Living Picture) (1954), a large terrier, stood on its two back feet, languidly grasps a seemingly unconscious naked woman. Similarly, Meme les Jeunes filles (Even the Young Girls) (1966), draws the eye in with its abstract depictions of entwined, writhing bodies.

Dominated by earthy, natural tones, Tanning’s paintings appear subdued yet playful – thoughtful interpretations of memory rather than anguished nightmares. Apart from the dog’s, no facial features are depicted, and as a consequence the viewer is kept at a distance, unable to relate to these fragmentary figures.

The paintings encapsulate Tanning’s surrealist tendency to draw upon fragments of memory, nightmares and fairy tales. Yet her ability to capture movement is still more pervasive: the space is filled with falling, collapsing bodies. Works on paper, such as Tango (1989), underline Tanning’s figurative skill; although smaller and more delicate, the miniature characters convey a similar gestural quality.

The show is not a comprehensive overview of Tanning’s work but, by spanning 50 years of the artist’s career, it does well to condense her lifelong study of the interplay of figures. The British artist and pioneer of installation art, Shelagh Wakely, is the focus of the Camden Arts Centre this summer. Aptly entitled ‘A View from a Window’, the exhibition introduces Wakely’s prominent themes of boundaries, edges and divisions, while revisiting a 40-year career.

There is an overwhelming, eclectic mix of work on display, from installations to prints, videos, unfired clay sculptures and exploratory drawings. The golden floor piece, The Practice of Enchantment (1993) radiates an elegant, ephemeral quality, in contrast with some of the more ordinary items, such as bowls, cups and jugs or sculptures of feet, hands and shoes.

Gallery 1 showcases many of these objects on low, flat plinths on the floor, surrounded by Wakely’s soft, exploratory drawings, which feature smatterings of symbols, like hieroglyphics. It is an onslaught of objects and codes, all of which seem to fade into one another.

The show’s standout piece is Curcuma sul Travertino (1991), a large, ordered baroque design made of the spice turmeric, sprinkled on the floor with a stencil. The pungency evokes a sort of melancholy nostalgia, stimulating memories that will fade over time, like the turmeric’s scent. This notion of fragility and decay is reflected throughout Wakely’s work. Even the physicality of the sculptural vessels is jeopardised – their edges are purposeless as they sit forgotten, containing nothing.

At a time when Wakely’s contemporaries, such as Susan Hiller and Richard Deacon, were well known for producing bold, sculptural pieces, Wakely was less well known for her transient, delicate work that challenged the use of traditional materials – perhaps because she spent much of her career working in Brazil. This show succeeds in giving an impression of Wakely’s long career and it mostly makes sense of the vast array of materials and themes.

Tanning died in 2012, and Wakely the year before. Both are now thankfully being brought back into the public eye – not just as ‘women artists’, but as artists whose significant contributions to their field should not be forgotten.

‘Dorothea Tanning: Web of Dreams’ is at Alison Jacques Gallery, London, until 27 September.

‘Shelagh Wakely: A View from a Window’ is at Camden Arts Centre until 28 September.