During his lifetime, Schiele was charged with being a pornographer, but his nudes, while candidly explicit, allow none of the easy indulgence of banal erotica. In Seated Nude Girl with Pigtails (1910) pornographic clichés – pert, rosebud lips, wide blue eyes, stockinged legs, tender youth – are given a ghoulish aspect, flesh greyly streaked over an emaciated frame, a single gaunt hand reaching out towards us, resting on an empty page. Schiele, who was prosecuted and imprisoned for his use of underage models in an Austria where child prostitution and destitution were rife, paints a troubling and complex portrayal of nascent sexuality, fragility and impoverishment, in which both viewer and artist are voyeuristically culpable.

Woman with Black Stockings (1913) also borrows from the lexicon of contemporary pornography. In it, a female figure (perhaps Schiele’s lover Wally Neuzil) reclines bare-breasted, lifting her skirt to expose her genitals between parted legs. Lips, nipples, garters and vulva are picked out in vivid red. Schiele’s typically economical, almost preternaturally confident line gives us a figure mid-gesture, with right shoulder raised and hands pulled back. Her legs are raised, resting on something invisible, and truncated, giving the image an ungainly feel, like something off-kilter. Her posture is tense and awkward, her body suspended between movements, in a fleeting glimpse, a brief moment between artist and model preserved.

Schiele’s use of pornographic tropes and very young models, combined with his emphasis on bodily awkwardness, contortion and distortion give these images their distinct aura of unease. Here there are no milky nudes, smooth-bodied and luxuriant; there are no decorative Seccessionist dream-women, after his mentor Gustav Klimt. Instead, Schiele gives us Nude Pregnant Woman Reclining (1910), her face unfinished and masklike, with voids for eyes, her arms vanished to nothing, her figure reduced to red, swollen mounds of stomach and breasts, her truncated legs parted as though ready for birth (but still stockinged). Here, pregnancy engulfs the woman, eclipsing her. In Schiele’s vision, to observe, or to have a body is to have a difficulty.

Schiele has a feeling for the knotted and angular, for ungainliness and contortion. But his favoured postures – twisted, stretched, splayed – are also dynamic. In Crouching Woman with Green Kerchief (1914) a female figure is seen folded into herself, her body defensively curled into a receding coil of arms, shoulders, belly, breasts. Her body is alert and tightly sprung, full of energy to be unleashed. Beside it is Standing Nude with Stockings (1914) an image of the same model, this time upright, in which Schiele emphasises the muscularity of her frame. Twisting away from the viewer, she appears almost warrior-like, her left shoulder raised and her hand tense and ready to act, eyes fixed intently on something beyond the frame. 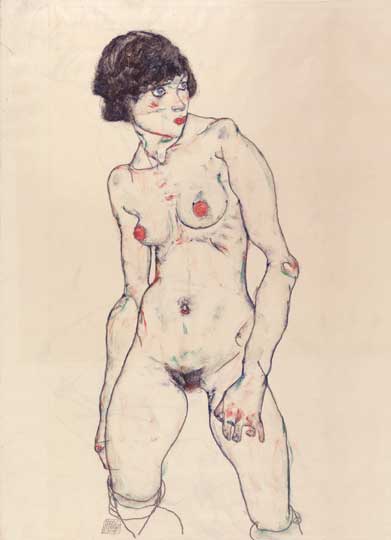 ‘Egon Schiele: The Radical Nude’ is at the Courtauld Gallery, London, until 18 January 2015.

Owning the Past: Why the English Collected Antique Sculpture, 1640–1840, by Ruth Guilding