The travails of public sculpture have been in the news pages once more this summer. Two separate disputes involving Anish Kapoor, one in France and one in China, and a rather bizarre court judgement in the USA have revealed the complexities of showing art in this way. In Versailles, Kapoor’s work Dirty Corner, which he had previously described as ‘the vagina of the queen’, was vandalised with anti-Semitic graffiti. Kapoor initially argued that the graffiti should be left, but shortly afterwards a court ordered Catherine Pegard, President of the Chateau de Versailles, to cover it up. The artist has now decided a covering of gold-leaf is the way forward. Kapoor is simultaneously embroiled in a dispute with the Chinese city of Karamay. A shiny, reflective sculpture in the shape of a bean has appeared in the city, and looks suspiciously similar to Kapoor’s Cloud Gate, his 2006 work that is sited in Chicago and which featured prominently in the 2011 Hollywood blockbuster Source Code. 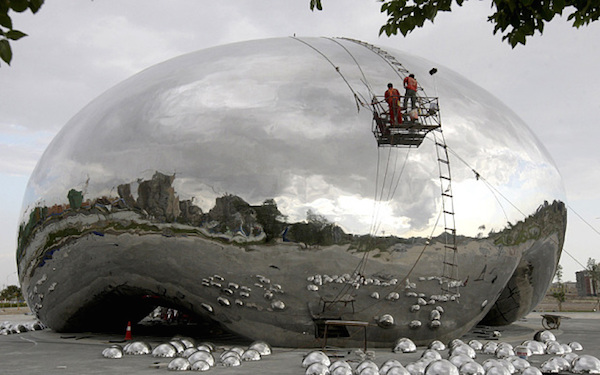 The American court judgement also concerned plagiarism. The sculptor John Raimondi has received damages of $640,000 from the Russian billionaire Igor Olenicoff as the latter made four unauthorised copies of sculptures by Raimondi (manufactured, unsurprisingly, in China) and displayed them publicly. However, in an odd twist to that case, US District Judge Andrew Guilford ruled against the prosecution’s argument that the fakes be destroyed and decreed that the new works be attributed to Raimondi, thus creating four new Raimondis against the artist’s wishes.

Perhaps Judge Guilford had been mulling over the implications of Rosalind Krauss’s seminal essay ‘The Originality of the Avant-Garde’. Krauss discusses Rodin’s The Gates of Hell, a public sculpture that was commissioned and then cancelled. The work was not cast during the artist’s lifetime and the first bronze of it was made three years after Rodin’s death. The work has existed since then in various casts as a copy without an original. From this point of view, originality in sculpture is a flawed concept, an idea echoed perhaps in the defence that the Chinese have put up against Kapoor. ‘Cloud Gate intends to reflect the sky, but ours reflects the ground,’ Ma Jun, a spokesperson from the Karamay tourism bureau has stated, before adding, ‘You can’t say we’re not allowed to build a round sculpture because there already is a round one.’

Public sculpture going wrong is commonplace. Thomas Heatherwick’s B of the Bang was commissioned to commemorate the 2002 Commonwealth Games in Manchester. Construction overran on the £1.72m sculpture and then when finally complete, the spikes that formed the core of the sculpture started falling off leading to legal action. The work was taken down in 2009 and the core sold for recycling for £17,000. Richard Serra’s Tilted Arc was installed in Federal Plaza in New York in 1981 and taken down in 1989 after users of the square complained that it dominated the plaza and impeded the public usage of the space. Lack of maintenance is also a common issue. Daniel Buren is currently calling for his collaboration with architect Christian Drevet in Place des Terreaux in Lyon to be demolished as the piece, consisting of 69 small fountains with 14 pillars surrounding them, has fallen into a state of disrepair that does not meet Buren’s lofty standards. But it is important to note that public sculpture can work – for example, Antony Gormley’s Angel of the North. The site-specificity of that work, which rises out of the landscape next to the A1 at Gateshead, is intrinsic to its effect. Richard Wilson’s mesmerising Turning the Place Over, installed in Liverpool between 2007 and 2011, was specific to the disused building in which it was installed. Rachel Whiteread’s House articulated a very particular moment around the re-development of the East End of London. Chinese knock-offs of any of these pieces would never work because their effect arises from the place and the time they were installed. And this perhaps is the key to making public sculpture work – to make it speak of a particular location at a particular time. Without that, it is a form of art open to abuse of many different kinds.

An interview with Richard Wilson