1922 saw the birth of literary modernism, in the form of the publication of James Joyce’s Ulysses and T. S. Eliot’s poem The Waste Land. 2022 saw a profusion of events, broadcasts and publications to mark their joint centenary. But another cultural event of that year, in its way no less consequential, attracted less attention: the premiere of Friedrich Wilhelm Murnau’s film Nosferatu: Eine Symphonie des Grauens, the film that paved the way for what we might call ‘vampire modernism’ – for an era in which the vampire would creep into every corner of culture, and become an all-encompassing metaphor for the anxieties (political, racial, economic, medical, sexual) of the modern world. We have met countless – pun inescapable – varieties of vampire: the tragic sexy teens of the Twilight films, the lovable buffoons of What We Do in the Shadows and its TV spin-off, the jaded hipsters of Jim Jarmusch’s Only Lovers Left Alive; Black vampires, biker vampires, Californian vampires, cartoon vampires, catsuited vampires, child vampires, cuddly vampires, and on and on. So much blood.

Nosferatu itself was for a long time hidden in the shadows. On release it was hailed by some as a work of genius – the Surrealists were particularly taken with it – but failed commercially; it didn’t get shown at all in the United States or Britain, where distributors reportedly rejected it as ‘too horrible’. It was based on Bram Stoker’s novel Dracula, published only 25 years earlier, though Henrik Galeen’s screenplay changed names, setting and details of the plot – this vampire was called Count Orlok; he came to haunt not late Victorian London but Wisborg, a fictional Baltic port, and the action took place some 60 years earlier, in 1838; rats were elevated from a minor element in Stoker’s scheme, so that the vampire became a harbinger of plague. But Stoker’s estate had not granted permission: his widow sued, and the negatives and most prints were destroyed. For decades the film was seen rarely, and in mutilated versions; but its reputation among cinephiles grew, thanks in particular to the critic Lotte H. Eisner, who wrote of its haunting beauty. In recent years, surviving reels buried in archives have been collated and digitally restored, so that we can now see something very close to Murnau’s intentions. 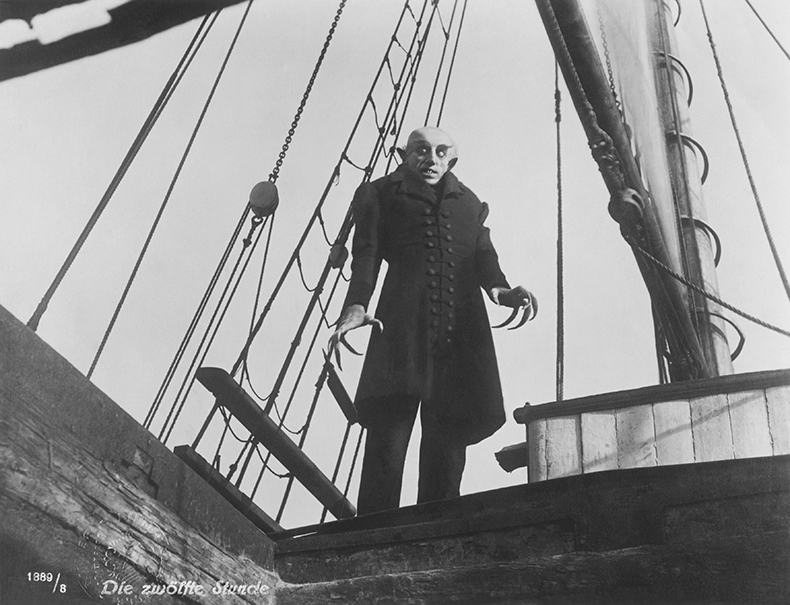 Why does Nosferatu matter? As the late, much-mourned critic Kevin Jackson noted in his study for the BFI Film Classics series, parts of it don’t work well for modern audiences – actors gurn and gesticulate, some special effects verge on the comic. And yet its beauty and eeriness aren’t altogether dead. A striped hyena prowls by night; a professor lectures his students on carnivorous plants and the tiny creatures that lurk in water, monstrous under a microscope; rats seethe out of a coffin; the ship that bears Orlok and a dead crew glides as smoothly into Wisborg’s harbour as if guided from beneath by some spirit. Landscapes and seascapes, mountains, heathlands, storms, evoke Caspar David Friedrich (still alive in 1838). Above all there is Orlok himself, played by Max Schreck – not the aristocrat with slicked hair, opera cape and ominous smirk played by Bela Lugosi and Christopher Lee, but a grotesque with domed bald head, bat ears, hook nose, fingernail like talons and two slender fangs in the middle of his mouth, like a vampire bat. Much of the time Schreck moves stiffly, shoulders hunched, hands held across his chest as though he can’t shake off the cramp of the coffin; but at times he is inhumanly furtive or frantic. And there is his final moment of agony as he stoops over the woman he thirsts for, and fails to notice the dawn: Orlok was the first in a long line of vampires burned by the sun. 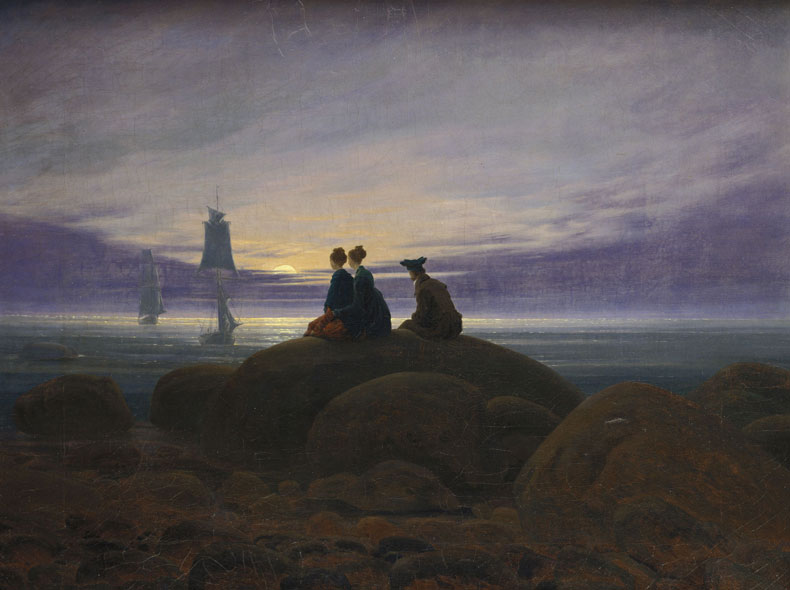 But to go back to the beginning, to 1922 – it’s worth noting that Orlok wasn’t the only vampire stalking the land. A passage in the fifth section of The Waste Land, ‘What the Thunder Said’, runs:

A woman drew her long black hair out tight
And fiddled whisper music on those strings
And bats with baby faces in the violet light
Whistled, and beat their wings
And crawled head downward down a blackened wall

Eliot is clearly thinking of the terrifying moment in Stoker’s Dracula when Jonathan Harker, the estate agent visiting Castle Dracula to negotiate the sale to the mysterious Count of a property in London, looks out of his bedroom window at night:

What I saw was the Count’s head coming out from the window. I did not see the face, but I knew the man by the neck and the movement of his back and arms. In any case I could not mistake the hands which I had had so many opportunities of studying. I was at first interested and somewhat amused, for it is wonderful how small a matter will interest and amuse a man when he is a prisoner. But my very feelings changed to repulsion and terror when I saw the whole man slowly emerge from the window and begin to crawl down the castle wall over that dreadful abyss, face down with his cloak spreading out around him like great wings.

And in the third chapter of Ulysses, ‘Proteus’, wisps of ideas about kisses and blood run through Stephen Dedalus’s thoughts as he walks by the sea: ‘He comes, pale vampire, through storm his eyes, his bat sails bloodying the sea, mouth to her mouth’s kiss.’ Four chapters later, this has ripened into a snatch of verse:

On swift sail flaming
From storm and south
He comes, pale vampire,
Mouth to my mouth.

Joyce is thinking (as always) of several things at once, including the romantic verse of the Irish poet Douglas Hyde, but also, surely, of his fellow Dubliner Bram Stoker, and of Dracula’s arrival in England on a sailing ship run aground in a storm. Vampires were always lurking in the cellars of modernism, among the foundations. Perhaps, indeed, ‘vampire modernism’ isn’t a useful term – maybe we should just stick to calling it modernism.

‘Phantoms of the Night: 100 Years of Nosferatu’ is at the Scharf-Gerstenberg Collection in Berlin until 23 April 2023. The inspiration behind Batman’s Joker and many a monster movie, Paul Leni’s ‘The Man Who Laughs’ is a masterpiece of Expressionist cinema A new adaptation of Bram Stoker’s novel has Castle Dracula kitted out with silver, tapestries, and suitably sinister portraits