‘Sculpture in the Home’, at Pangolin London, comes amidst a resurgence of interest in interior design. The Serpentine are currently showing Martino Gamper’s ‘Design is a State of Mind’ and Haim Steinbach’s ‘Once Again the World is Flat’ featuring made and borrowed objects which lie somewhere between art and design. Meanwhile, the Middlesbrough Institute of Modern Art is showing ‘Art and Optimism in 1950s Britain’, a nostalgia-fest of art, furniture and memorabilia.

In the aftermath of the Second World War, the ‘Sculpture in the Home’ exhibitions promoted an optimistic and aspirational idea of affordable lifestyle. However, the general public were still relatively conservative in their tastes. As Polly told me when we met in the foyer of King’s Place, ‘people through necessity had to be outward looking when it came to furniture. Because of the shortage of materials, furniture designers were forced to look at new ideas. I think there was a slight delay in people accepting that in sculpture…If you look at newspaper cuttings from the time, [there] was still very much wry humour about “Modern art”.’

One implication of the shows’ display strategy, placing artworks alongside cutting edge furnishings, was to collapse the hierarchy of art and design, sculpture and ornament. ‘Transporting large-scale sculptures both during the war and after was incredibly difficult. So these small compact shows were a good solution, and bringing it into a domestic environment meant it suited the small scale of the sculptures. [The programme] really found its feet once it started taking the design a bit more seriously. In the early stages it was still very traditional sculpture with traditional furniture.’

The shows were aesthetically coherent because there was a strong shared visual language between art, interior design and architecture at the time. Furniture designers were responding to smaller more compact living spaces, and sculptors were working within the same constraints. As Polly put it, ‘in the ‘50s you see this amazing crossover that you can’t really pinpoint to any other time. In terms of a visual language – in this case, heavy mass supported by spindly legs – you see it in the sculpture, the architecture, and the furniture design, and it seems to be really coherent and strong.’ There was also a very collaborative approach, with artists commissioned by manufacturers to create designs for textiles or wallpaper, such as Geoffrey Clarke’s wonderful Paintings for Textiles, three of which are on display at Pangolin.

In the 1940s and ‘50s, new materials were a major source of innovation. A comparison could be drawn with the present development of digital technologies. As Polly suggested, ‘Geoffrey Clarke was a pioneer in using polystyrene, which at the time was a really brand new material…I think the digital age will be the next thing, where we’ll see a new wave of people using it to their advantage.’

The fascination with 1950s design isn’t limited to museums. Ercol and G Plan, two of the original furniture designers featured in ‘Sculpture in the Home’, have recently brought out ranges that revisit their iconic ‘50s and ‘60s designs, suggesting a growing market. As Polly commented, ‘it’s certainly very fashionable at the moment, and you can see the shapes replicated in things you can buy from Next and IKEA. The wingback armchair is a very hot design at the moment, and Sanderson have reissued a lot of their 1950s wallpapers, some of which we’ve used in the show. I think there is a renewed interest in good design, and I don’t want to make too strong a comparison but post-war people wanted good design for a good price, and we’re seeing that again post-recession.’

When I asked whether she thought there was a nostalgia for the optimism of the 1950s and the promise of consumerism, Polly answered, ‘I’m sure in sculpture and certainly in design that it must have felt as though the slate had been wiped clean for a moment, and that you could progress. It’s quite hard to imagine what that must have been like now. At a time when the cynics amongst us say “nothing’s ever new” there probably is a nostalgia for that really special and very short time before things started getting difficult again.’ 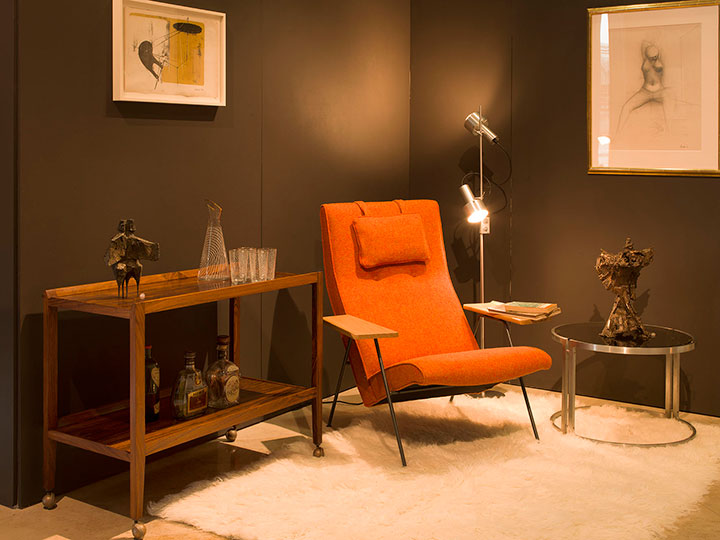 ‘Artist Textiles: Picasso to Warhol’ at the Fashion and Textile Museum (Carey Gibbons)