We often think there is something reassuring, even comforting, about the art of Pieter Bruegel the Elder. Life goes on, in a rather jolly way, oblivious to the great dramas of history, he seems to be telling us. ‘How everything turns away quite leisurely from the disaster,’ as W.H. Auden famously observed in his poem Musée des Beaux Arts.

We are fond of Bruegel’s paintings, not because they speak to our own age, or pre-figure modern attitudes, but because they are so deeply rooted in their own time. Odd, therefore, that Christie’s should seek to set up a dialogue between Bruegel and the art of today. But the recently opened exhibition at Christie’s Mayfair – ‘The Bad Shepherd: The Brueghel Dynasty in Conversation with Contemporary Art’ – does exactly what it says on the tin. And contrary to my expectations, it is largely a success, offering some novel juxtapositions that illuminate both sides in the encounter.

This success is partly due to the curators avoiding laboured arguments about influence, modernity or the universal values of art; they leave it to the works on display, and the visual correspondence between them, to do most of the talking. Featuring rarely seen pieces from private collections, the quality of the art is consistently high and all stylishly presented in Christie’s New Bond Street exhibition space.

The contemporary artists include Sarah Lucas, Peter Doig, Jeff Koons, Thomas Schütte, Jeff Wall, Neo Rauch and Nicole Eisenman. Each artist is represented by a number of works, which prevents the exhibition becoming a succession of individual pieces illustrating a sequence of curatorial statements.

What we do not have, however, is anything by the great Pieter Bruegel the Elder. He is a ghost in the exhibition, an absence to which everything else refers. He came to painting late in his career, and died relatively young, leaving only a small body of work to his name. His paintings are extremely rare and difficult to borrow, even for an organisation with Christie’s reach and influence. If you want to see examples in London you will have to go to the National Gallery (The Adoration of the Kings) or the Courtauld (Landscape with the Flight into Egypt and Christ and the Woman Taken in Adultery).

Bruegel the Elder’s legacy was continued by his two sons (who changed the spelling of the family name), Pieter Brueghel the Younger and Jan Brueghel the Elder, and by Jan Brueghel’s descendants. Pieter the Younger closely imitated his father’s style and copied many of his works. In this exhibition we have 13 paintings by Pieter the Younger, almost as many as the total number by this artist in public collections in the UK, and it is worth visiting just to have this exceptional opportunity to see so many together in one place.

Bruegel the Elder was the innovator, developing a new naturalism in his depictions of everyday peasant life, often comic, sometimes satirical, but always informed by an acute awareness of social conditions. His family and followers took the brand and made it the currency of Flemish art.

It was a brand that appealed to sophisticated urban tastes at the time, because of the way it merged realism with narrative drama, truthfulness with allusion. And in the Low Countries in the mid 16th century this was subversive stuff, subtly exposing the political and religious oppression the province was enduring under Spanish occupation. In the rude resilience of peasant life was the promise of freedom.

We find, for example, a moral ambiguity in the title work of the exhibition, Pieter Brueghel the Younger’s The Bad Shepherd. Our youthful shepherd abandons his flock to the wolves, but saves his own skin, escaping with a wry smile on his face. He may be bad, but he is a survivor.

Jeff Wall’s image A Hunting Scene is directly influenced by Pieter Bruegel the Elder’s famous Hunters in the Snow. Wall’s photograph, presented on a grand scale as a lightbox transparency, describes a mundane suburban landscape, but also suggests a troubling narrative of violence. 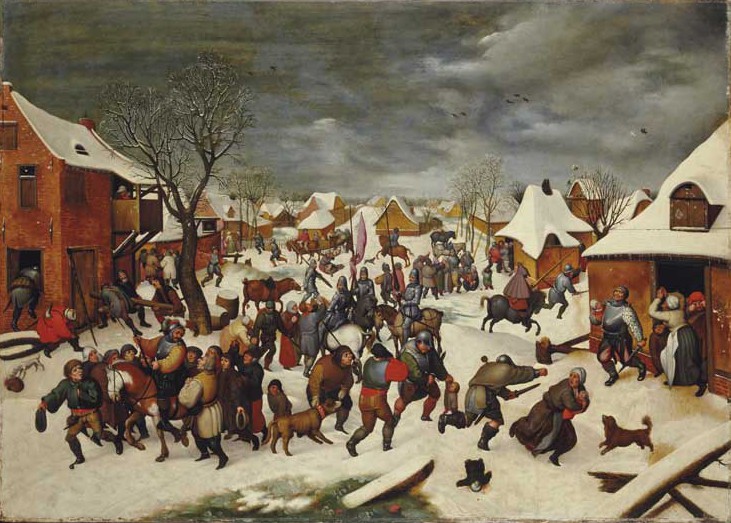 Peter Doig’s landscapes are similarly disconcerting. Floating somewhere between figuration and abstraction, they evoke a mood of tranquillity, but one that is shadowed by foreboding. They resonate with winter landscapes by Pieter Brueghel the Younger and Marten van Cleve, where the crowd scene turns out to be, on closer inspection, the Massacre of the Innocents.

The exhibition explores the social and political consciousness in the art of the Brueghel family. By doing so through comparisons with the art of today it encourages us to see beyond the ‘Old Master’ label, and to rediscover something radical and unsettling in the Brueghel view of the world.

‘The Bad Shepherd: The Brueghel Dynasty in Conversation with Contemporary Art’ is at Christie’s Mayfair until 16 January 2015.

Forum: Are online auctions the future of the art trade?

Earlier this year, the Hiscox Online Art Trade Report estimated the value of the online art trade in 2013 to…