‘Conflict, Time, Photography’ at Tate Modern opens with Toshio Fukada’s photo of the mushroom cloud above Hiroshima. Fukada had heard the blast from the nearby Army Weapons Supply Depot and rushed to fetch his camera and find a good spot to observe the boiling atomic cloud. These images were taken moments after the event. From this starting point, so crucial to the course the century has taken since, ‘Conflict, Time, Photography’ moves on to present photographs taken at different periods following conflicts all over the world.

Twenty years after the bomb, Kikuji Kawada published The Map, a photo-book depicting its aftermath. His images of Japanese shrines to Second World War kamikaze pilots were mixed with others showing the still visible effects of the blast in Hiroshima in the 1960s. They were presented in a long fold-out format, intentionally difficult to handle and read, to encourage a slow contemplation of the images and their relationship to one another.

On the gallery wall, Kawada’s shot of a discarded Lucky Strike cigarette packet from The Map is mirrored by a similarly cropped photo of a discarded Japanese flag: both are abandoned and worn, their decay highlighted by the photographs’ intense dark tones, but both still clearly bear their iconic circle motifs. Kawada shot both from above, as the American pilots in the Enola Gay must have observed the city before dropping the bomb. But, being an American product dropped since the explosion, this packet presumably represented for Kawada the lasting cultural consequences of the bomb. The Allied nations occupied Japan up until 1952, and as Kawada was putting The Map together Japan was going through an economic recovery, partly due to trade with America. 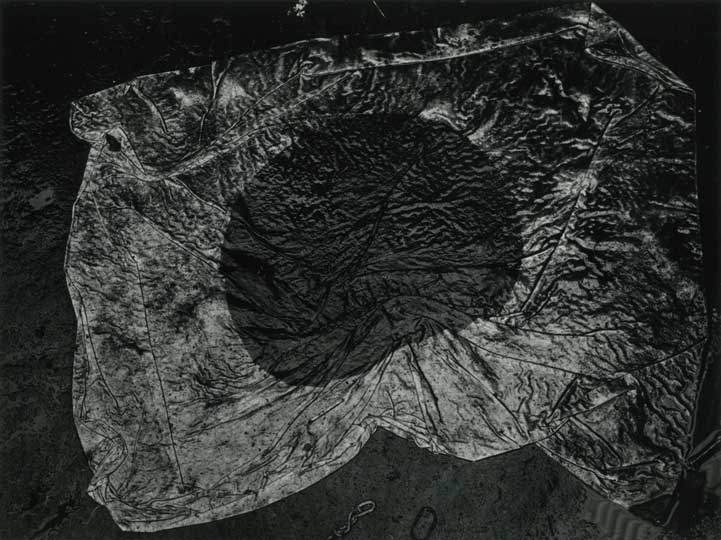 An-My Lê’s photographs of Vietnam were taken 19 years on from the Vietnamese War, on her return to the country she had been forced to flee as a teenager. Again, corporate logos – in the form of Sanyo, Compaq and Xerox billboards lining a river – are used to represent something of the cultural changes that can occur following a conflict.

Earlier in the exhibition a whole room, floor to ceiling, is taken up by Sophie Ristelhueber’s images of the Kuwaiti landscape seven months after the First Gulf War. She took photographs both from an aircraft, of the cratered desert battlegrounds, and on the ground observing the wreckage of abandoned weaponry closer up. ‘[It’s] not about that war. It’s only a work about scars’, Ristelhueber has said of her series. Physical scars are present elsewhere in the exhibition, in photographs of burn victims from Hiroshima and Nagasaki. As a whole, though, ‘Conflict, Time, Photography’ is less about shocking images, which we may find ourselves numbed to now. It is a more contemplative record of how scars of conflict persist for decades after the event, and presumably will continue to do so for a lot longer.

The Clark Art Institute, Williamstown, Massachusetts, is transformed by a new extension and refurbishment