‘We sent out sheets of paper wrapped in tissue in hard envelopes to artists, and said “please make a work from this and donate it to the Drawing Room”. Then we sold them all in a rather chaotic fashion’, is Kate Macfarlane’s potted history of the first Drawing Biennial in 2003. Back then, the Drawing Room itself (which was and remains the UK’s only non-profit programme dedicated exclusively to contemporary drawing) was just a couple of years old and had been operating as a roving initiative, touring curatorial projects to regional museums. When a space became available at the Tannery Arts Studio (‘Rachel Whiteread had vacated and the artists wanted to reinstate a gallery’), Macfarlane and co-director Mary Doyle knew they had some fundraising to do. A sale seemed a practical enough solution, and also a good way of both gauging and garnering artistic support.

‘We didn’t really understand the potential it had at that stage’, Macfarlane admits when we meet, surrounded by the latest consignment of works, a few days before the opening of this year’s Biennial – the Drawing Room’s seventh, and the biggest yet. Some 268 works by 253 artists (more than twice the count at the first sale) are strewn across the Bermondsey gallery: the traditional ones are laid out in plastic sleeves ready to hang in neat alphabetical order on the walls, while the more unorthodox creations have a designated table to themselves. One has an enormous dead butterfly attached, another comes with two mussel shells ready to slot into place on a carefully sliced page. ‘Martin Creed screwed up a piece of paper and gave it to us in a ball once’, Macfarlane recalls, when I ask them for some of the more memorable contributions they’ve had over the years.

By now, all the works are on show, and they’ll be auctioned online between 16 and 30 April. Whoever the artist, and whatever the medium, the starting price is £250 – but with contributions by the likes of Creed, Richard Deacon, Tracey Emin and Cornelia Parker, many of them will make much, much more. Until they received a slice of Arts Council money in 2012, the Biennial sales accounted for around 50 per cent of the Drawing Room’s programming budget. The 2013 auction fetched in the region of £160,000. 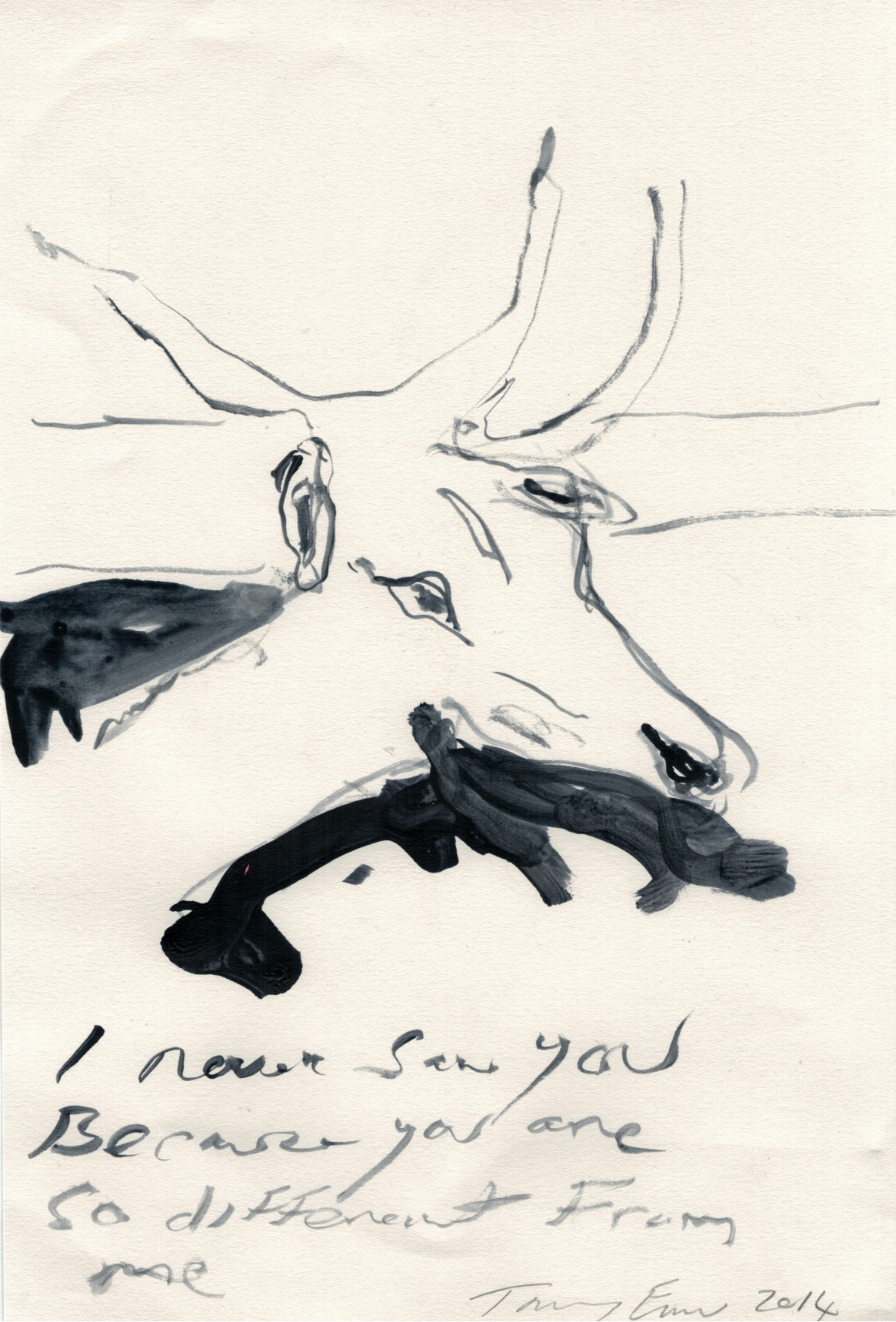 When you rely on a single event to such a degree, it pays to be shrewd about it. Doyle and Macfarlane speak frankly about their efforts to reach an international audience (in part, by inviting more international artists), and about the growing potential of online sales. Their website, which launched in 2009, was a major investment, but ‘really worth it’: ‘In the States’, Macfarlane observes, ‘more people are happy to buy works sight unseen whereas in the UK people still struggle to do that’. With such a range of names and prices on offer, they’re able to attract new and established buyers alike – but only if the drawings are good enough. ‘Even if a work is by a really well known artist, people will only go to a certain level if it’s not up to scratch…We have some very discerning buyers.’

But while fundraising may be its raison d’etre, the Drawing Biennial is patently more than just a moneymaking scheme. Much of its value is in the networks its enables, the collaborations and mutual support that such a large exhibition can spawn. Doyle and Macfarlane cast the net deliberately wide when considering which artists to invite. ‘It’s artists we’ve worked with, artists we will be working with, artists we’d love to work with, and just others’, Macfarlane explains. ‘We get nominations as well’, adds Doyle. ‘We ask people in the profession from all sorts of different venues and galleries, and other artists too.’ Brett Littman (executive director of the Drawing Center in New York), the artist Adam Chodzko, and Hans Ulrich Obrist are among those they consulted this year. The latter suggested Samson Kambalu. ‘I’d never really thought of his work as drawing’, Macfarlane admits. ‘It’s certainly opened our eyes to work we wouldn’t be that familiar with’.

Many of the exhibiting artists are closely engaged, volunteering their own work, suggesting other artists, and buying, too. ‘I think [the set-up] allows artists to put forward people that they think need a leg-up’, Doyle explains. ‘Quite often, artists who are already established will put forward somebody much younger.’ Or, indeed, somebody whose work has been chronically overlooked: in 2009, Cornelia Parker recommended Rose Wylie, long before the 80-year-old won fresh public attention on winning the John Moores painting prize last year.

This sort of conversational selection process makes for an eclectic mix of drawings, with an air of insider knowledge which plays to the Biennial’s advantage. There’s a definite sense that, pinned up alongside the contributions of some of today’s greatest artists, are the early works of tomorrow’s stars. As we rifle through the drawings, we pause again and again over surprising pieces, even from the old hands. ‘Michael Craig-Martin’, announces Doyle, holding up a neat diagram of a brain in a helmet. Macfarlane takes a look – ‘That’s quite different from Martin isn’t it?’ Nods of assent. Later we come to a Paul Noble drawing of a yoga figure in an impossible pose. ‘It’s hilarious. He phoned me and said “I really don’t know what to draw”‘, Macfarlane laughs. Noble has rarely drawn full figures in recent years, but perhaps he’s on to new things. ‘I think we’ll be seeing that one again’.

It may be bigger and more organised than it was a decade a go, but I hope the Biennial never loses that sense of underlying chaos – the delicious uncertainty and anticipation that results when you send hundreds of artists a blank page and a simple invitation to experiment. Somewhat paradoxically, the Biennial has emerged as one of the highlights of the exhibition programme it was set up to support.

George Vasey recommends Raoul de Keyser’s work in Edinburgh; Vanessa Remington introduces the art of the garden at the Queen’s Gallery; and ‘Classicicity’ explores ancient and modern art in tandem

The Met steals the show at Asia Week New York