‘I often think anything made by a 3D printer these days looks like an anaemic fossil.’ So saying, Grayson Perry captured the unease surrounding the prospect of a 3D printing revolution: the impression of a world of brittle multiplication, the collapse of craftsmanship, the evaporation of the original – a world of objects born obsolete.

Speaking alongside academics Jerry Brotton and Lisa Jardine on the theme of ‘Objects as Evidence of Themselves’, a talk organised by Sir John Soane’s Museum in connection with its exhibition ‘Diverse Maniere: Piranesi, Fantasy and Excess’ (until 31 May), Perry’s phrase echoed the exhibition’s own ambivalence towards established chronologies of cause and effect, of origin and trace. ‘Fantasy and Excess’ sets off in pursuit of a thoroughly Piranesian paradox: the physical manifestation of an ‘original copy’.

Among the Soane Museum’s casts, copies and original antiquities, amassed in a space as complex and chiaroscuroed as one of Piranesi’s Carceri etchings, the exhibition presents a series of extraordinary 3D prints derived from the fantastical, near impossible designs outlined in Diverse Maniere, the artist’s 1769 publication of his fertile fantasies for contemporary ornamentation. The conceptual is translated into full-scale physical reproductions: a silver jug in the form of a seashell, poised on the back of a tortoise and sporting a spout in the shape of a bee; a golden throne in water-gilded resin; a bronze tripod guarded by sphinxes. The idea for the exhibition was first proposed by the Italian architect and designer Michele de Lucchi and subsequently placed in the hands of the design studio Factum Arte, renowned for their ‘renaissance workshop meets Silicon Valley’ approach to 3D modelling, creating bespoke software and equipment for projects as wide ranging as a facsimile of Veronese’s Wedding at Cana for the refectory of San Giorgio Maggiore in Venice, concrete printing technology developed for Anish Kapoor, and a reincarnation of the hallowed interior of Tutankhamun’s tomb. So, are these copies, or original artworks? 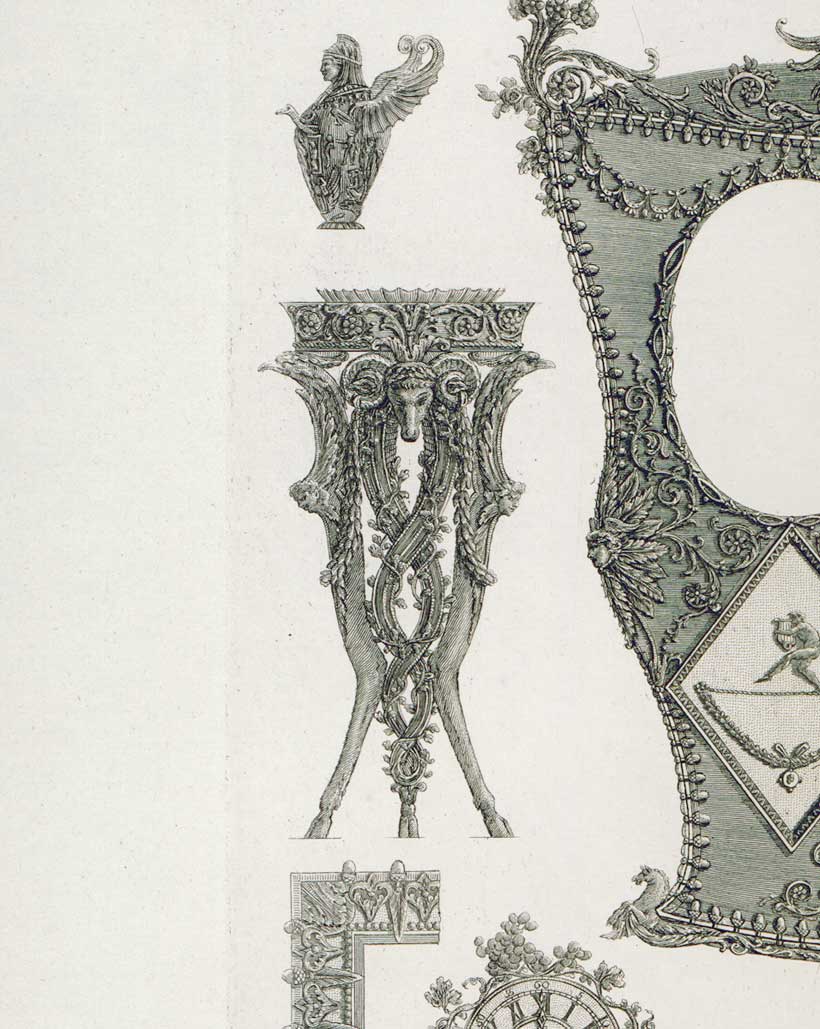 They are fundamentally studies of surface, investigations not only of artefacts but of ‘artifacts’ – the scientific term to describe error – a rupture in regularity. In the words of Factum Arte’s director Adam Lowe, ‘most 3D applications are interested in shape […] we’re interested in the noise and peculiarities and details of a surface.’ As such, these objects are symptomatic of our yearning for the tactile, faced with the ‘melancholy, long withdrawing roar’ of a tide that sweeps up all manner of debris – analogue film, malfolded maps, bound books – leaving behind the bare shingles of digital immateriality.

The preoccupation with material culture has permeated academic and art historical structures, moving away from theory and an emphasis on the ‘self’, towards a celebration of the intelligence of touch – the experience of the object. In the summary verdict of Jerry Brotton, author of A History of the World in Twelve Maps: ‘It used to be all about the ICA and talking about Foucault, now its about the V&A and talking about frocks.’

It’s a trend reflected in Jon Day’s essay ‘Please Do Touch’ which appeared in the December issue of Apollo, as well as in forthcoming books such as Joe Moshenska’s Feeling Pleasures: The Sense of Touch in Renaissance England or Hans Ulrich Obrist and Tom McCarthy’s Mapping It Out, which charts the imaginations of contributors ranging from contemporary artists to science-fiction writers. Meanwhile, the term ‘post-materiality’ has emerged in contemporary art, attaching itself to works such as Marlie Mul’s resin puddles, or the visceral, vacuum-formed friezes of Nicolas Deshayes.

Piranesi and Soane, who met in 1778, shared the same haptic instinct in their interpretation of forms, rejecting the calcifying, philological tendency to assign objects to a specific time or maker. Their practice generally disregarded context in favour of form, radically combining disparate architectural elements from Classical, Etruscan or Egyptian antiquity with a view towards ‘improvement’ rather than adulteration, revitalising dusty antique fragments into compositions of dissonant harmony – an exquisite corpse. For Piranesi, ‘It is not the multiplicity of ornaments that offend the eye, but the bad disposition of them.’

A similar curatorial approach can be seen in the recent trend for ornately eclectic exhibitions indulging our partiality for visual spectacle, where themes such as ‘archaeology’ or ‘cabinets of curiosity’ provide a carousel of material traces unanchored by time or place. Yet, as perhaps demonstrated by the current ‘Ruin Lust’ exhibition at Tate Britain, our fascination with materiality is more likely to be founded on impulses of fetischisation and self-projection than forensic analysis. The Soane’s collaboration with Factum Arte is a brilliant counterbalance to that tendency, proposing radical new possibilities for conservation and the role of facsimiles in a world ready to progress beyond giddy, self-consuming narratives of simulacra and simulation, and achieve originality anew.

‘Diverse Maniere: Piranesi, Fantasy and Excess’ is at Sir John Soane’s Museum until 31 May 2014.

Deacon stretches the concept of drawing well beyond the flat page